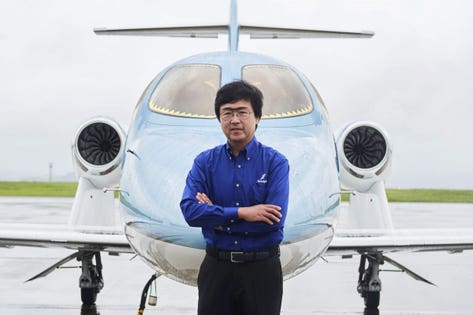 Japan is only a few hours’ flight from China, one of the world’s biggest markets, and countless businesspeople shuttle between the two countries. Not all parts of the mainland, however, have easy connections to the archipelago. For instance, flying to Tokyo from Changsha, the capital of Hunan Province, takes at least seven hours with transfers in China or South Korea. But when one smartphone screen manufacturer in Hunan needed to send representatives to Tokyo, it decided to use a business jet for quick, hassle-free travel. The trip took a few hours instead of all day and resulted in two important deals with major Japanese smartphone makers.

Japan is on the cusp of a revolution in business aviation

As a result of deregulation, flying to and in Japan on business jets is now simple and quick, giving passengers unprecedented flexibility and convenience in their travel plans. It’s the latest piece of an advanced infrastructure, from hyper-modern bullet trains to logistics terminals, that’s designed to make Japan one of the world’s most business-friendly nations.

“Over the past two years, we’ve seen an improving trend in clients going to Japan because of greater flexibility in arrival and departure times,” says Jolie Howard, CEO of TAG Aviation Asia, a Hong Kong-based aircraft charter and management company. “With three days’ notice, they can arrive anytime during the day and park where they want, even at Haneda Airport in Tokyo, whereas before it was limited to late-night and early-morning time slots.”

“Japan has all the ingredients to be the most business jet-friendly place in Asia,” says Jolie Howard, CEO of TAG Aviation Asia.JapanVoice

Part of the Swiss-based TAG Aviation group specializing in long-range business flights, TAG Aviation Asia manages private aircraft travel for clients including high net worth Chinese businesspeople. While many of them travel to Japan for business, pleasure trips to tourism hot spots such as Hokkaido, renowned among skiers and snowboarders for its deep powder snow, are also increasing. Overall, Howard estimates that TAG’s business jet travel to Japan increased about 40 percent in 2016 to 2017, it’s continuing to grow at the same rate in 2018, proving the trend is stable.

“The business jet industry in Asia is only 10 years old and there’s still lots of room to grow,” says Howard. “Japan has all the ingredients to be the most business jet friendly place in Asia, with very good local infrastructure such as trains… It just needs to accept business aviation as part of the economy. The key here is that we are not competing with airlines. Our business is point to point for places not served by airlines. It’s like taxis versus buses – they coexist and there’s no need to take each other over.”

Japan has seen limited growth of its business jet industry, with only about 50 business jets registered in the country. But recent developments in Japan’s public and private sectors are opening up the skies. Under the government’s deregulation policies, in 2010 Haneda Airport launched a dedicated international terminal and, four years later, increased the availability of parking spots for foreign business jets; up to 50 such flights now land in Japan every week. Meanwhile, leading airports across the country are increasing the options for business jet travelers. For example, Kansai International Airport opened its new Premium Gate Tamayura facility for business jets in June 2018. It offers 24-hour service and greater privacy, as well as smoother security, drop-off and pick-up facilities, and CIQ, with applications due by noon the day before landing.

HondaJets, which have class-leading features such as fuel efficiency, are set to go on sale in Japan.JapanVoice

The Japanese aviation industry has also been vitalized by the founding in 2006 of Honda Aircraft Company, whose high-tech HondaJets boast class-leading features such as fuel efficiency. The HondaJet Elite, for instance, has a range of 1,437 nautical miles, putting all of northeast Asia within reach of Shanghai and nearly all of North America within reach of Denver. Honda Aircraft recently announced sales of the HondaJet in Japan as well as a tie-up with ANA Holdings to use HondaJets for feeder and charter flights in Europe and North America.

“A lot of infrastructure and investment has gone into business jets recently in Japan—there are now 84 local airports and these have the potential to change Japanese industry if fully utilized,” says Honda Aircraft Company CEO Michimasa Fujino. “If influential companies and universities set up bases in local areas, it will increase the flow of people and use of the land.”

“Wealthy passengers who are flying into Japan for business are now thinking of returning for leisure trips,” says Toshio Kitamura, president and CEO of Japan Aviation Service Co., a Tokyo-based company specializing in ground handling and business flight support.  “They want to go to areas with hot springs or famous food, especially Hokkaido, Kyushu or Okinawa, so these places are seeing big potential in tourism.”

Kitamura estimates that in terms of economic value, a typical business jet traveler could spend as much as 400 regular travelers, which is the equivalent of a jumbo jet. He believes that if the current growth trend in business jets continues, it will enhance travelers’ awareness about regional areas of Japan, which will lead to economic benefits. He says that the key to accelerating business jet use in Japan is to maximize time savings by users with super-efficient facilities. And he agrees with Howard that the mindset in Japan is changing, with more and more executives, celebrities and other VIPs seeing private aircraft as an essential tool for business.

“I think the key message here is to watch this space,” says Howard. “It’s got great potential, and once we see more deregulation and more facilities it’s going to be great for manufacturers, and business suppliers.”

So if you want to get the most out of your next trip to Japan, consider business aviation. With the speed and convenience of a business jet, you could hold meetings in Tokyo, then fly to Hokkaido for skiing and hot springs before jetting back overseas again. Japan’s growing ranks of business aviation specialists are eagerly awaiting your arrival.