Silly Season Is Upon Us 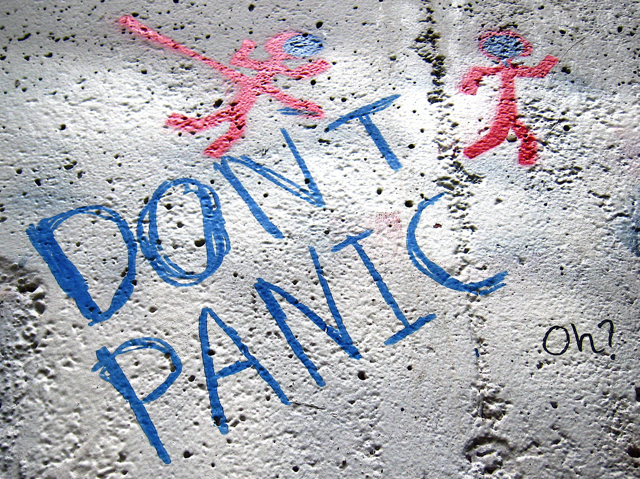 That feeling when graffiti makes more sense than floor traders. By cogdogblog – Good Advice, CC0, Bring a towel, too. (2535543334).jpg

Apple (AAPL) is always subject to Silly Season in their Q1 (Christmas quarter). Q4 has 1-3 weeks of new iPhone sales, but the motherlode is Q1, so speculation is rampant. Apple is the most secretive company in the world, which allows the speculation to shape-shift into fact.

Apple is also the most written-about company in the world, and the best way to get clicks in the tech press is claim-chowder headlines about Apple’s days being numbered. One day, they will be right. But this past decade, how many times have they been wrong? Answer: many. Here’s a fun example from April of this year, long after everyone should have known better:

The iPhone X, Apple’s new flagship phone and heir apparent to the universal design of a smartphone, only accounted for 16% of the company’s smartphone sales so far in 2018, according to estimates from analyst Consumer Intelligence Research Partners. The share of all new iPhones sold in the first quarter of 2018 has slid to 60%, down from 78% in 2015, the report stated. The new models include the iPhone X and the iPhone 8 and 8 Plus—meaning the old versions of iPhone are selling almost as well as their updated counterparts.

Apple’s introduction of the iPhone X, and its elevated $1,000 price, indicated Apple had confidence that people would be willing spend more than ever on a new phone to get cutting-edge technology—but a 11-point slide year over year in sales might indicate that confidence is misplaced…

We’ll know soon enough what the quarter looked like for Apple, as the company reports its earnings May 1.

How’d that work out?

Oh, right. I wonder if Dave ever wrote a headline, “Boy, Was I Wrong About the iPhone X!”

This year, Silly Season is even bigger. If this past week wasn’t The Bear and The Bull engaged in thermonuclear war, I don’t know what was. The Animal Spirits are out. The headlines are flying fast and furious. Analysts are downgrading Apple left and right, focused on iPhone units instead of profit for some reason. Anytime someone reminds me that the iPhone has a small market share, I try and remind them they also take about 80% of ALL smartphone profits every quarter.

Anyway, not to pick on Peter Cohan specifically, but there’s been a lot of this:

Apple has been producing new iPhone versions and raising its prices on them. But its high price is not holding for the latest version, the iPhone X, so as Bloomberg reported, Apple is offering customers a 40 percent discount.

How so? On December 2, Apple added a new banner to the top of its website advertising the iPhone XR for $449, $300 less than its official sticker price. The deal, noted with an asterisk and described at the bottom of the page, requires customers to trade in an iPhone 7 Plus, a high-end handset from two years ago.

O how mighty Apple has fallen!

To put it in perspective, the plunge in the iPhone gross margin has been precipitous. As I mentioned, In 2012, the iPhone had a 71 percent gross margin. Before the 40 percent discount, the iPhone X had a much lower gross margin of 48 percent — its price was $749 and the cost of the parts was $390, according to IHS Markit.

By discounting the price to $449, the iPhone gross margin drops to 13 percent.

Bonus points for “O how mighty Apple has fallen!”

He is correct that Steve Jobs loved high gross margins so much that his wife was probably jealous of their relationship. But, unfortunately, arithmetic and common sense are Cohan’s nemeses here.

The first thing is plain common sense. Cohan and others weirdly assume that Apple is going to just chuck these trade-ins into the trash and call it a day. Does that sound like Apple to you? Does that sound like something any company would do? Of course, Apple refurbishes them, and sells them in its online store.

Secondly, as I will show below, Apple is most most likely increasing profits here, not decreasing them.

You wouldn’t know it from these articles, but Apple has had a trade-in program for years now. Two things have changed:

Here are the changes in trade-in value:

So I believe two things are going on here. Apple sees that the upgrade cycle is lengthening, and badly wants to get those people with very old phones into a new one. The extra credit only applies if you are buying a 2018-year phone (Apple also sells new previous year phones as a budget option). As we have learned many times in the past, this does not necessarily mean iPhone units are down, though I suspect they are anyway.

To me, the only units that matter are US dollars, to paraphrase Johnny Rotten.

The second thing I think is going on has to do with the iPhone 7 Plus, which I believe to be Apple’s focus here. This is pure speculation, so take it with a grain of salt, but in analyzing how they’ve set up the promotion, it just looks like to me that, while they’re taking all comers, they are particularly interested in that model. Apple is deliberate about every single detail of everything, and it can’t be an accident. Why?

First, let’s look at the economics of this transaction.

US dollars! Aren’t they the best? Completely fungible global reserve currency, and the easiest way to keep score. How odd it is that analysts insist on using phone units to keep score when dollars are just sitting right there.

Someone buys an iPhone XR for $449 plus an iPhone 7 Plus in “good” condition. There’s a lot of wiggle room between those two quotation marks, but Apple’s definition of “good” is “anything where the refurb cost is low enough that we can still make an acceptable profit.”

I looked on eBay to get a sense of where the market for used iPhone 7 Pluses stood as of today. I cataloged the last 100 completed transactions that fulfilled the following qualifications:

I think this comes pretty close to what Apple is looking for. The last 100 phones sold in this category averaged in price $347.54.1 Apple could just turn around these phones that they are purchasing for $300, and make a 13.7% profit on them the same day. And remember, that’s the least expensive of the iPhone 7 Pluses. The 128GB and 256GB versions fetch about $60 and $120 more on eBay, respectively. Apple pays $300 regardless.

But they don’t sell them on eBay, of course. They send it back to Hon Hai, where they are rubbed and scrubbed and sold in the Apple refurb store, for $479, $569 and $649, depending on storage. Remember, that $649 version still cost Apple only $300. Let’s be super-conservative and say the average sale price is $500 because of heavy mix towards the 32GB phone. That means Apple’s profit here is $200 minus the cost of refurb.

Apple does not give anything away. Ever. They like to put on a soft, PC face, but they are also the greediest company out there, because Steve Jobs understood that the scorecard was all in dollar signs, not phone units.

I think this is another brilliant lever-pull by Tim Cook, that no one else even saw, won’t understand until the May conference call, and maybe never. Or, I’m just completely wrong. Isn’t following Apple fun and exhausting?

I Think They’re Headed to Asia

Again, we’re into purely speculative territory here, but this is based on a few things:

But Wouldn’t This Cut Into New iPhone Sales?

Yes. Probably. I don’t care. More to the point, neither does Apple. The margins on the refurbs are high, it increases their user base in the fastest growing part of the world, and juicing foreign sales, where the profits are much higher, will make up for some of the reduced units on the top-line phones. Analysts may care where the dollars come from, but Apple does not.2 They are the only units that matter.

But there is an old saying that the market can remain irrational longer than you can remain solvent. The Bull and The Bear are out, fighting for supremacy, with one fear trade on top of another. Say whatever you want about trade, the Fed, liquidity, whatever. We are into pure Animal Spirits and none of it matters until one of them wins.

So under these conditions, I can’t say that Apple stock won’t go even lower; you may even be able to get it as low as $100 if The Bear wins. But I also think that the price for Apple now is absurdly low, and a year from now will be a lot higher. I took another taste at $150, even though I am a big Fat Bear right now. If it goes to $100, I will probably buy more. That’s how I do Apple, I only buy, never sell. It’s working so far, until it doesn’t.

During the Cold War, solid data about the Soviet Union was very hard to come by. Frustrated political scientists came up with the field of “Sovietology,” which was more art than science. They would pour over articles and photos in Pravda looking for any clue into new policy or inner-circle machinations from article verbiage, and photo composition and airbrushing. You will probably be unsurprised to learn that, lacking data, their predictions were not very good.

Covering Apple is kind of similar and equally as frustrating. They are almost as secretive as the Soviets between SEC filings, and so we have to engage in a little educated guessing, and hope our record is better than the Sovietologists. Anyone from outside of Apple who tells you they know what is happening at Apple is a liar. Heck, most of the people inside Apple don’t know what’s going on beyond their own small world there.

As always, the speculation about this quarter will end with their 10-Q, and maybe we will get a couple of days’ break before the speculation on Q2 begins. Until then, speculate away!

My policy with heavily-followed companies like Apple is to not read or respond to comments, as they seem to attract a large amount of FUD and trolling. Feel free to send me a private message if you have a question or comment directed at me. If you are polite and respectful, you will almost certainly get a response that is also polite and respectful.

1 I included shipping for two reasons. 1. This is the full cost of what the buyer was willing to pay. 2. Low price + high shipping cost is the oldest trick in the book.

2 When the iPhone was first released, some analysts complained that it would cut into iPod sales and was therefore a bad idea. Seriously.

Disclosure: I am/we are long AAPL. I wrote this article myself, and it expresses my own opinions. I am not receiving compensation for it (other than from Seeking Alpha). I have no business relationship with any company whose stock is mentioned in this article.

Additional disclosure: Forever, and ever

Editor’s Note: This article discusses one or more securities that do not trade on a major U.S. exchange. Please be aware of the risks associated with these stocks.